Markets in a Minute: Stocks fall as US headline inflation soars 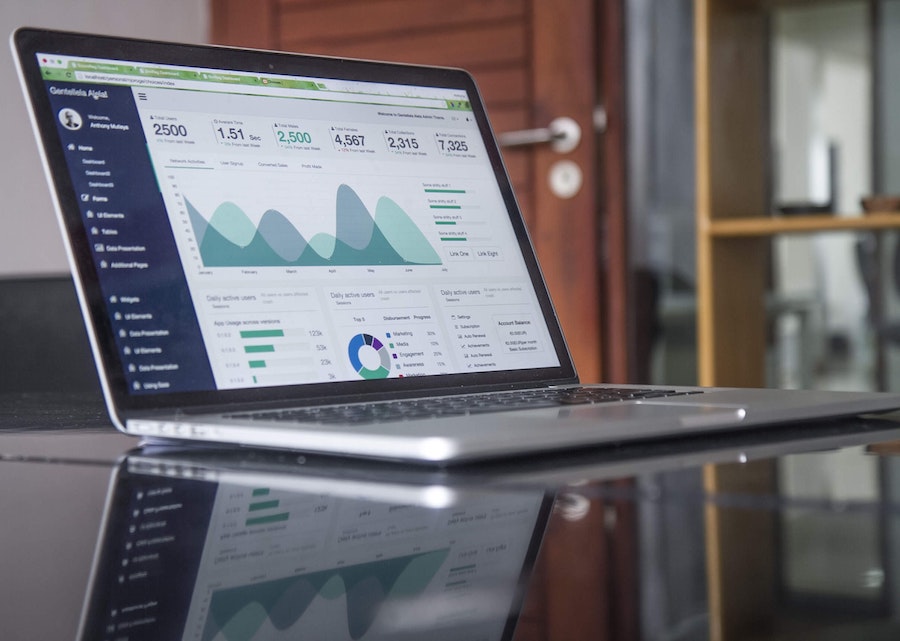 20 Jun Markets in a Minute: Stocks fall as US headline inflation soars

Posted at 13:07h in Advocate News and Advice by Paul Povey 0 Comments
0 Likes

An update for NetworkIN Advocates on US inflation increases and signals from the European Central Bank that they could increase rates from Paul Povey, Financial Advisor of Team Stoke.

US and European indices fell last week as US headline  inflation soared and the European Central Bank (ECB)  signalled it could increase interest rates at a faster rate  than anticipated.

After a positive start to the week, the S&P 500, Dow and  Nasdaq slid 5.1%, 4.6% and 5.6%, respectively. The  consumer price index (CPI) for May, released on Friday,  showed headline inflation rose by 8.6% from a year earlier  – higher than consensus estimates.

Stocks in Asia had a more encouraging week, with the  Nikkei 225 edging up 0.2% after figures showed the  Japanese economy shrank by less than expected in the  first quarter. China’s Shanghai Composite rose 2.8% on  news Beijing appeared to be easing its crackdown on the  technology sector.

*Data from close on Friday 3 June to close of business on Friday 10 June.

The FTSE 100 slumped 1.5% on Monday (13 June)  after data from the Office for National Statistics (ONS)  showed UK gross domestic product (GDP) contracted  by 0.3% in April after declining by 0.1% in March.  Economists had been expecting a slight increase of  0.1%. The ONS said the scaling back of the Covid-19  vaccination programme and pandemic test-and-trace  was the biggest contributor to the monthly fall in GDP.  Manufacturing also suffered with some companies  affected by rising fuel and energy prices.

Stocks in the US and Europe also slid on Monday  following speculation the Federal Reserve might decide  to raise interest rates by 75 basis points at its next  policy meeting on 14-15 June. The S&P 500 and the  Nasdaq lost 3.9% and 4.7%, respectively, while the  STOXX 600 fell 2.4%. Concerns over a resurgence of  Covid-19 cases in China weighed on markets in Asia,  with the Shanghai Composite, Hang Seng and Nikkei  down 0.9%, 3.4% and 3.0%, respectively.

The FTSE 100 opened in the green on Tuesday as  investors mulled the latest UK labour market data.  Unemployment edged slightly higher to 3.8% in the  three months to April from 3.7% in the three months to  March. This was the first increase since the last three  months of 2020. The number of job vacancies hit a new  record high of 1.3 million, while real wages (adjusted for  inflation) fell by 2.2% year-on-year.

Inflation in the US accelerated to a new four-decade  high in May as the cost of petrol, food and other  necessities surged. The headline CPI rose to 8.6% from  a year ago, faster than April’s year-on-year increase of  8.3% and the highest level since December 1981. 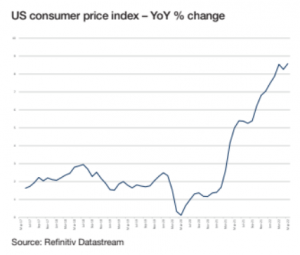 The increase was driven by a surge in prices for gasoline,  food and shelter. Energy costs rose by 34.6% from a year  earlier, while groceries jumped by 11.9%. On a month on-month basis, prices rose by 1.0%, significantly higher  than the 0.3% increase in April and above economists’  expectations of a 0.7% rise. Once food and energy prices  were stripped out, core inflation rose by 0.6% month-on month and by 6.0% from a year ago, according to the  Department of Labor.

Inflation and interest rates also dominated the headlines  in Europe last week. The ECB signalled it was likely to  raise rates by half a percentage point in September,  in addition to a planned quarter-point rise in July. ECB  president Christine Lagarde and chief economist Philip  Lane had previously said rate rises of 0.25% were the  benchmark for its meetings in July and September. On  Thursday, however, Lagarde said risks to the inflation  outlook were “primarily on the upside”, according to a  report in the Financial Times.

“Russia’s war against Ukraine has severely hit  confidence, caused energy and food prices to soar  further and, together with pandemic-related disruptions  in China, compounded existing supply chain pressures,”  the ECB said. “These factors pose strong headwinds  for the economic recovery in the euro area and come  at the same time as a relaxation of pandemic-related  restrictions, which is providing a strong boost to the  services sector.”

The latest economic growth figures for Japan proved  to be better than expected. According to the Cabinet  Office, GDP declined by an annualised 0.5% in the first  quarter of the year, less than the initial estimate of a 1.0%  contraction. On a quarter-on-quarter basis, GDP shrank  by 0.1%, beating expectations for a 0.3% decline. Private  consumption, which makes up more than half of Japan’s  GDP, rose by 0.1% from the previous quarter, while  inventories also increased. This helped to offset a 0.7%  quarterly fall in capital spending.

Markets in a Minute 14 June 2022 from Brewin Dolphin on Vimeo.

The value of investments, and any income from them, can fall and you may get back less than you invested. Neither  simulated nor actual past performance are reliable indicators of future performance. Performance is quoted before  charges which will reduce illustrated performance. Investment values may increase or decrease as a result of currency  fluctuations. Information is provided only as an example and is not a recommendation to pursue a particular strategy. We  or a connected person may have positions in or options on the securities mentioned herein or may buy, sell or offer to  make a purchase or sale of such securities from time to time. In addition we reserve the right to act as principal or agent  with regard to the sale or purchase of any security mentioned in this document. For further information, please refer to  our conflicts policy which is available on request or can be accessed via our website at www.brewin.co.uk. Information  contained in this document is believed to be reliable and accurate, but without further investigation cannot be warranted  as to accuracy or completeness. Opinions expressed in this publication are not necessarily the views held throughout Brewin Dolphin Ltd.